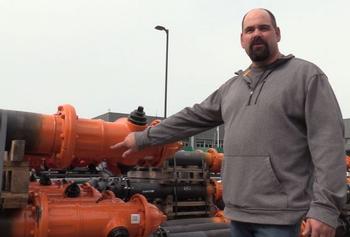 Without water, firefighters wouldn’t be able to do their job, but it’s our duty to make sure the fire hydrants are properly working at all times.

On any given day Charles Smith says there are a few dozen hydrants waiting to be replaced, but that’s dramatically less than a few years ago when it was common for more than 100 to be out.

“As we see the numbers creeping up we make it a priority to get the numbers back down to a manageable number,” said Charles Smith, Deputy Director for Maintenance and Construction.

Smith jokes the city’s fire hydrants are almost magnets for drunk drivers. Car crashes are a major factor in what leads to an average of 270 hydrant replacements every year.

October was National Fire Prevention Month, and the Water Bureau’s efforts in maintaining functioning hydrants and ensuring the system works properly is a key ingredient in stopping fires from spreading.

The bureau has more than 14,000 hydrants it takes care of. That number is growing due to increased development throughout the city.

The goal is to have a working hydrant every 500 feet citywide.

“It’s a focus for us because it’s an essential service that we provide to the city,” Smith said.

Besides the immediate need for fire suppression, having a fully functional system of fire hydrants gives Portland Fire & Rescue a preferential reading for insurance purposes and can lower homeowner’s insurance rates as well.

The improved response time has been a focus for Maintenance and Construction crews, due partly to better planning.

“If we have an opportunity to replace three in one shut down so that we don’t impact the neighborhood multiple times, we’ll go in and cut in a series of new valves and new hydrants at the same time,” Smith said.

Keep Your Home and Family Safe: How to Prevent Fires

Educating yourself and others about fire safety, injury and illness prevention, and disaster preparedness helps to keep everyone safe.

Learn the steps you can take to keep your home, family, business, and community safe from fires.