The Bull Run Watershed is a great primary water source. The temperate rain forest gets as much as four times the precipitation of notoriously rainy Portland. However, despite the abundant and reliable rainfall, the watershed has experienced the impacts of a warmer climate.

The plots below show decreasing summer streamflows over the past 40 to 50 years. Lower summer  flows have implications for summer water supply availability. A definitive cause of these reduced streamflows remains a question of interest to bureau researchers, but climate change is likely an important factor.

“To me, this sort of analysis is a local reminder that the Pacific Northwest is not immune to the effects of climate change and that we have already been impacted, whether we realize it or not,” says Beal.

While the average customer being more water-wise helps stretch water supplies during the summer months, the bureau has still had to pump significant amounts of groundwater to meet water demands as recently as 2015 and 2018 in response to  earlier than usual dry seasons. Bull Run will likely experience similar stressful water supply years in a warmer future. Continued investments in Portland’s groundwater system are needed to make the entire water system more resilient in the face of these future stressors.

“The decline in summer streamflows has significant implications for our future summer supply,” said Kavita Heyn, the bureau’s Climate Science and Adaptation Program Manager. “We need to recognize the vulnerability of the Bull Run supply to warmer and drier conditions, and ensure we have a reliable groundwater supply, that together with Bull Run, can meet water demands.” 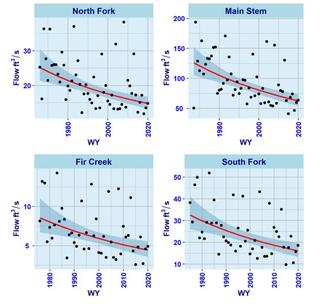 The plots show a decreasing streamflow trend in four of the Water Bureau’s primary stream flow gages for the hydrologic summer, which spans July, August, and September. The y-axis shows flows in cubic feet per second, and the x-axis shows the average monthly flow for a given year.