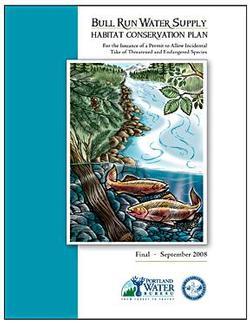 The Bull Run watershed has continuously provided water to the people of the Portland metropolitan area since 1895. Only recently, however, has the City begun to fully account for the role that the Bull Run River plays in supporting the larger aquatic ecosystem of the Sandy and Lower Columbia rivers. From 1998 to 2006, when the federal government listed four fish species (coho, Chinook, chum salmon and steelhead) as threatened in the lower Columbia River Basin, the City became subject to the requirements of the federal Endangered Species Act (ESA).  In 2002, the Oregon Department of Environmental Quality also listed the lower Bull Run River as a water quality limited stream due to the City’s operations. The City  then became subject to the requirements of the federal Clean Water Act (CWA). To protect the fish species and comply with federal law, the City is obligated to mitigate for impacts caused by the operation of the water supply system.

The Portland Water Bureau developed the Bull Run Water Supply Habitat Conservation Plan (HCP) in 2008 to describe the 49 specific mitigation measures the City will undertake over a 50-year period to address flow, temperature and habitat impacts that result from the City’s drinking water operations and facilities. The HCP measures enable Portland to maintain an Incidental Take Permit certifying that the City is in compliance with the federal ESA.  The City also created a water temperature management plan, as part of the HCP, to comply with the CWA as it operates and maintains the Bull Run water supply system. The Final Bull Run Water Supply Habitat Conservation Plan was approved by the Portland City Council on October 1, 2008.

Annual reports are required from the City to document compliance with the conservation measures, monitoring requirements, research efforts, and adaptive management actions that are implemented. Links to compliance reports are posted below:

The Portland Water Bureau and the Oregon Parks and Recreation Department are restoring key habitat for threatened salmon and steelhead at Dabney State Recreation Area this summer.