- "First, while I’m proud that our City holds no direct fossil fuel assets in our financial investment portfolio, it’s not enough. The City must urge the Oregon State Treasurer, the Local Government Investment Pool and the Oregon Investment Council to divest of all state holdings in fossil fuel."

-"Second, I pledge that the City will begin implementation of the resolution passed last year instructing the City to buy 100 percent renewables. Likewise, we will work with our utility partners to reduce reliance on coal and natural gas to generate the electricity that serves all Portland residents and businesses. We can and will lead by example."

-"Third, the City must move forward aggressively on the city’s 2009 Climate Action Plan. The plan sets a goal of reducing emissions from City operations to 50 percent of 1990 levels, and doing so by the year 2030. This month, I issued a set of instructions and challenges to our City Council, and to our City Bureaus. One challenge calls for each bureau to further reduce its energy use by two percent each year. By pairing energy efficiency with renewable power, we will achieve our 50 percent carbon reduction goal for City operations. Again, we can and we will lead by example."

− "As another challenge to our City Council and City Bureaus, I have asked that EACH service-delivery bureau in the city seek and achieve Salmon-Safe certification within the next two years."

− "I pledge that within 10 years, the bike will be the preferred mode of transportation for all trips under three miles in Portland."

−"By pairing energy efficiency with renewable power, we will achieve our 50 percent carbon reduction goal for City operations." One of the main World Environment Day events was a rally at the RoZone as part of the Rose Festival. There were over 20 environmentally focused exhibitors, a concert performance by Joy Now, and a “procession of species”- a parade of children and families dressed up as animals. 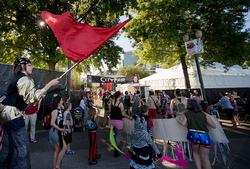 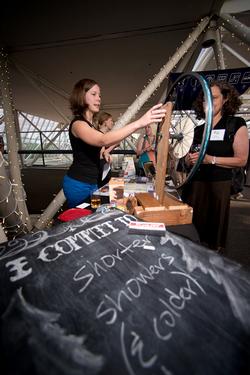 Letter from UNEP to City of Portland