Coach Lowe has my deepes 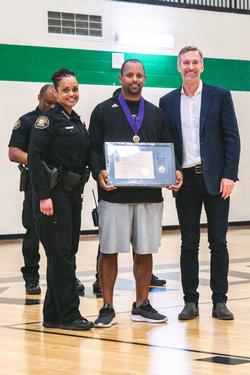 t gratitude and respect for his actions on May 17th.  He was in the right place at the right time and reacted selflessly when he saw a student in a classroom with a weapon.  Because of his actions, the quick thinking of his fellow colleagues, as well as the students who alerted staff of unusual behavior, no one was injured.  As we all know, it could have ended much differently. day of recognition on behalf of all Portlanders.

Coach Lowe embodies courage, honor, and self-sacrifice.  Since May 17th it has been my pleasure to learn more about him. He is a leader and has been throughout his life.  I have heard him say he was placed right where he was needed at a certain moment in time, which I completely agree with.  I respect the fact Coach Lowe takes on the mantle of a leader in our city.

He is deeply committed to helping young people who participate in sports and education move forward in life.  We all can learn a great lesson from his example.

I am grateful to Coach Lowe for what he did on May 17th, but I am inspired by him because of the quality of his character and his love of others.  Dr. Martin Luther King said, “The ultimate measure of a man is not where he stands in moments of comfort or convenience, but where he stands in at times of challenge and controversy”