Last week, the City was full of pride - honoring 50 years of Stonewall, 25 years of Pride Northwest, and of course Pride in Portland! 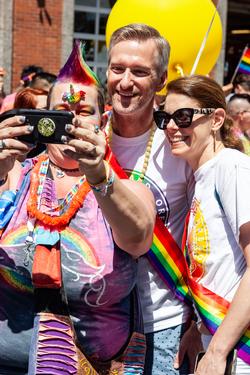 We kicked off Pride with a Pride Proclamation event at City Council last Wednesday. During the council session the Commissioner and I listened to important testimony from LGBTQ+ community members and the Executive Director of Pride Northwest, Debra Porta, on the history as well as the future of of Pride in Portland.

The day was filled with many emotions as we heard from community members like Jim Clay from Cascade AIDS Project on how our community continues to witness the struggles older adults in our LGBTQ+ community. we also took a moment of silence for those in our community - both past and present - who have been victims of hate because of racism, sexism, homophobia, and transphobia.

Then on Sunday, I joined my city colleagues as we marched proudly with our community in the Pride Parade in Portland in Portland. It was attended by over 45,000 people. The energy was incredible!

Thank you to Pride Northwest, We are Better together, City Employees LGBTQ+ and Friends Affinity group, my wife Katrina, and of course my staff for making Portland Proud!