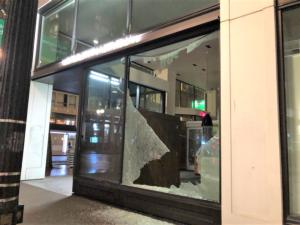 On Wednesday, January 6, 2021, at about 9:15 p.m., a group gathered in Chapman Square Park marched to Southwest 2nd Avenue in front of Central Precinct, where some applied graffiti. The group then marched to the new Multnomah County Courthouse on Southwest 1st Avenue and Southwest Madison Street, where someone tried to break into the exterior security fencing while several others with umbrellas tried to block the view of the suspect. A window at the courthouse was broken. A warning was given over loudspeaker.

The march then proceeded around downtown, where various business windows were broken. Officers made announcements to the crowd that due to the vandalism, the gathering was an unlawful assembly. As officers were preparing to engage the unlawful assembly, the group broke up and moved away. The group had mostly moved off by 11:30p.m. No force was used.

Officers are now attempting to locate the damaged businesses and arrange for board-ups. If anyone was a victim, please make a police report at https://www.portlandoregon.gov/police/cor/ or by calling police non-emergency at 503-823-3333. At this point, we're aware of a bank, a large clothing retailer, and a coffee shop that were victimized.

If anyone has information about the vandals or any other criminal activity during this unlawful assembly, please e-mail crimetips@portlandoregon.gov.